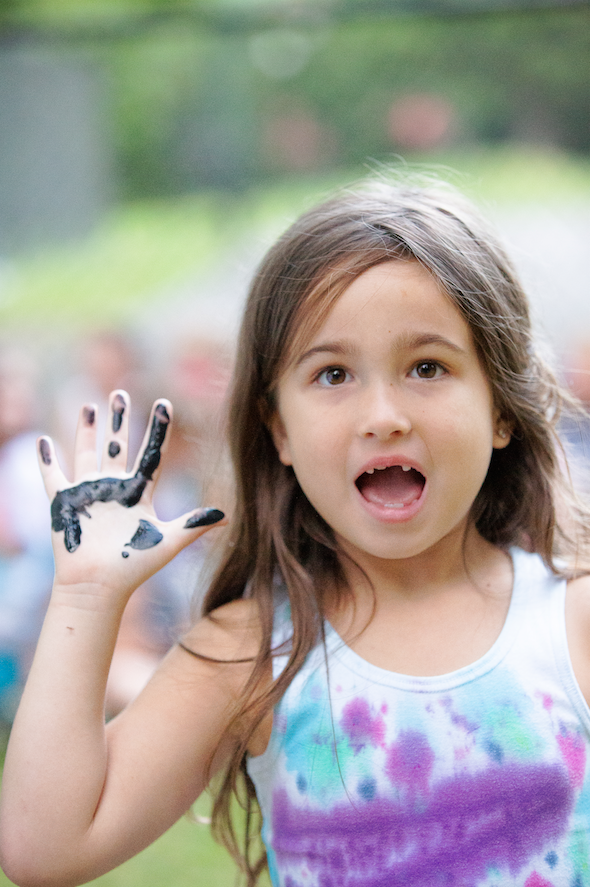 My mom ordered a handful of videos from the American Camping Association in the mid-90s. She handed me each one as they came in, sent me to our 1970s split-level’s basement where the VCR was hooked up, and said, “Choose one. It’s up to you since you’re the one who’s going.” And that was that.

I had spent the past few summers at one- or two-week Girl Scout camps, the ones themed around different badges (although I always chose horseback riding because it was the best). However, by this time, I’d lost interest in scouting and quit, giving up my eligibility to go to scout camps. Truthfully, as a kid I don’t remember much about my time in the organization other than that I loved earning badges (an Enneagram Three from birth, this one) and that I couldn’t live without summer camp.

So, charged with making a decision, I watched the videos, one by one, as they trailed in. Back then the internet was of the dial-up variety and online searches actually had endings to the list of results, so I’d wait eagerly to see what camp videos had arrived each day. It’s been more than twenty years since my mother handed me the padded white envelope with Merri-Mac’s video, but I still remember it vividly — the clunky black tape with the Merri-Mac label, the silver-gray VCR with the pop-up receptacle on the top (way cool back then, I promise), the black and white snow scrambled on the screen before the video actually started.

And, even all these years later, I still clearly remember two things from that tape: the music (a bluegrass-y instrumental) and one particular shot. The visual was of some girls going from right to left across the screen down a river in a canoe. The videographer was standing on the top of a ridge looking down through some trees at the group, and as the river rushed beneath them, the girls squealed and laughed with excitement. I never even saw their faces really — just the tops of their helmets — but you could hear them over the music, over the rush of the water. They were having FUN. And I wanted that — to be at camp, outside, miles from real life, with other girls like me, laughing and filled with joy.

I spent the next handful of summers at Merri-Mac. I went for four weeks at a time (yes, I can hear your gasping, but, no, it’s not too long — in fact we all always wished it was longer and sobbed the last few days of camp because we didn’t want it to end), and it shaped so much of who I was in adolescence and eventually who I am today. I can’t say enough of what the experience did for me as a pre-teen and high schooler, although I’ve certainly tried over and over.

And then somewhere along the line, I grew up. And I had Emma Vance. And then Cricket.

One of the first thoughts out of my mother’s mouth when I found out I was having a girl was asking when they’d start going to Merri-Mac. (Not if, but when.) We’d talk about it periodically while they were tiny — counting down the summers.

And now, just a few summers in, I can already see the ways Merri-Mac is already helping to form Emma Vance: The glow that comes over her when she recounts silly Tweedle stories; the excitement in her eyes when the weather starts to warm, a sure sign that summer (and camp) are coming; the joy in her voice when she randomly asks me, “Whatcha doin’ pruin’?” like it’s some sort of secret language only we understand; the pride in her nonverbals as she describes her tribe and what being an Iroquois means to her non-camp friends; the sweet, sleepy requests to be sung the Camp Psalm at bedtime.

Now that so much of my life has already become past tense, I can’t help but ache and wonder — What if that videographer hadn’t thought to climb up onto that ridge while the girls traveled down river? Would I have taken notice of Merri-Mac’s tape still? Would I have chosen this place? Would I be different? Would my girls?

Those questions linger, impossible to answer. But one question remains full of hope and potential — What if I could offer this experience to someone else?

The thing is, moments are fleeting and memories fade. Capturing them, framing them, giving them more permanence has always intrigued me — mostly because an image reinforces a memory, shapes it and gives it life.

An image has influence.

This past week I had one of those rare and beautiful opportunities to come full-circle in life. While Emma Vance was a camper at Merri-Mac, I filled in as a camp photographer. I was given the gracious chance to capture campers in those fleeting but impactful moments, to create images that I hope will have influence.

And although I wasn’t there, standing on a ridge as happy canoers floated by, all week I couldn’t help but wonder — Is this the one? Will someone, somewhere see this in their friend’s feed or framed in their room and ask what camp is all about? Will this be the one that makes a girl who doesn’t even know she needs this place in her life think, “I want that — to be at camp, outside, miles from real life, with other girls like me, laughing and filled with joy?”